The Dangers of Extreme Heat

I really don’t like the heat. To me, hot and humid weather is just about the worst kind of weather there is. Well, maybe 35 degrees with rain is worse. I can remember back in college when I worked as a weather observer and had to get up at 6am to take readings.. one day in January it was just above freezing and raining heavily. That hurt.

But heat can hurt too. Actually, it is really quite dangerous. While the onset of summer is a cause for celebration for many people (think children, teachers, families on vacation, etc.) there are weather-related health concerns that are often overlooked or minimized during this season. Summer storms can bring flooding or tornadoes. Summertime also sees the ever increasing likelihood of tropical storms and hurricanes. Air pollution is at its worst. But often more dangerous, and even more overlooked, is the danger posed by extreme heat. And as climate change threatens to make extreme heat events even more common, it is important to recognize the danger posed by extreme heat, and to know what to do about it.

Heat is among the leading weather-related killers in the United States. Sources differ on just how many people die each year due to heat. According to the National Weather Service, over the last 10 years, on average 97 people have died directly from heat-related causes each year. In 2016, the number of heat-related deaths was just under this average, at 94.  Other sources suggest that as many as 1000 people die each year due to heat, though this higher number likely includes indirect heat-related causes of death, such as asthma or other breathing-related illnesses worsened by heat. Older adults tend to bear the brunt of heat-related illnesses and mortality. The National Weather Service reported in 2016 that of the 94 people who died directly due to heat, 67% of these deaths occurred in individuals age 50 or older.

Heat waves tend to be particularly dangerous. While there is no universal definition of a heat wave, it is generally defined as a longer period (usually 3 or more days) of unusually hot and/or humid weather. The extended period of heat, along with unusually warm nights, are what make them so deadly. One of the worst heat waves in US history occurred in the summer of 1936, when temperatures soared across almost the entire country. Particularly hit hard were the upper plains states, like North and South Dakota, but even New Jersey saw temperatures rise above 110 degrees. Many states have all-time high temperature records still standing from this heat wave. 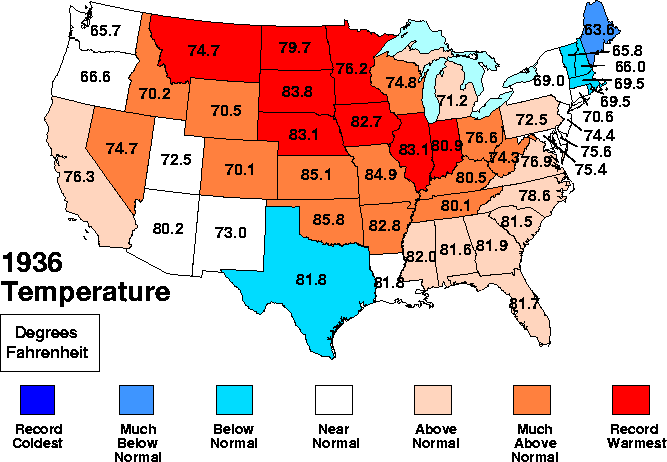 Average temperatures during July 1936.
(Image courtesy of the National Centers for Environmental Information)

What’s so dangerous about the heat? Basically, our bodies are meant to stay right around the same temperature all the time, usually between 97.5 and 99.5 degrees for most people. This is why we shiver when it gets cold and sweat when it gets hot–it’s our body trying to regulate itself. But when it gets too hot and humid, sweating doesn’t cool us down enough. Or, we might lose too much fluid, and salt, from sweating. If the body reaches 107 degrees, organs can fail and death may occur. Heat cramps, heat exhaustion and heat stroke are the three steps of danger in extremely hot conditions. Simple cramping can quickly lead to faintness, nausea, fatigue and headache when heat exhaustion sets in. And if untreated, heat exhaustion can progress to heat stroke, a potentially fatal condition.

And it doesn’t have to be excessively hot to cause health problems. The combination of heat and humidity, often called the heat index or the THI (temperature-humidity index) can have the same effect as heat alone. Even temperatures in the upper 80s can become hazardous if relative humidity levels climb toward 60%, a combination found in many areas in the US in the summer. And any prolonged exposure to high heat is dangerous.

So what should you do when the heat hits? Well, obviously, drink plenty of cool fluids and get inside into the air conditioning. Before air conditioning, though, people often went outside to avoid stifling indoor temperatures. Sleeping outside in screened-in porches was common in the days before air conditioning became ubiquitous in the 1940s. Today, there are many ways to keep cool on hot days including:

Heat brings to mind summer fun for many of us, and rightly so. But keeping the potential dangers in mind, and how to avoid them, allows us to enjoy more summer days to come.

Heat-related bonus fact: Many people know about heat waves. But have you ever heard of a heat burst? This rare meteorological phenomenon occurs when a thunderstorm dies out in an area with warm, dry air aloft. The downdraft from the dying storm can pull down the warm, dry air, which warms as it drops. This can cause a rapid rise in temperature. It is rare and short-lasting but can raise temperatures up to 20 or 30 degrees in just a few minutes!