The season of Fall begins very soon. September 23 is the start of Autumn and with the change of season, usually comes a change in weather. Climatologically speaking, September, October and November are considered the Fall months. What kind of weather can we expect this Fall?

As you can see from the images below, courtesy of the National Weather Service’s Climate Prediction Center, many areas are expecting a warm Fall, with above normal precipitation expected for much of the mid-Atlantic and southeastern US.

Given that September has already started fairly warm and dry in the northeast, with some tropical rains in the southeast, it appears that these predictions look good for now. But these types of outlooks can change, so keep in tune with your local forecasts for the latest weather predictions.

With the holidays now behind us, we now have the rest of winter to look forward to. The question is often asked – how bad of a winter will we have? I personally like colder weather and snow except when I am stuck in it on the roads, so to me, a snowy winter is not a “bad” winter.

The National Weather Service Climate Prediction Center released their latest forecast for the months of January, February and March recently. As you can see in the graphic below, most of the eastern part of the US is forecast to have even chances of being above or below normal in terms of temperature, so generally, I would expect fairly normal temperatures with some occasional swings. In terms of precipitation,  the graphic shows an expectation of above normal precipitation throughout the southeast and Mid-Atlantic states up to New Jersey. It is possible that we could see a few periods of colder weather and precipitation, resulting in snowfall, but so far this winter, warm weather has usually accompanied any wet weather we’ve seen.

Stay tuned! If any significant winter weather is on the horizon, I’ll be sure to keep you informed.

Maybe you love the return of the flowers and leaves in spring. Or maybe you enjoy the changing colors of the trees in autumn. Some people love all the outdoor activities they can do in the summer, while others prefer skiing and skating in winter. Whatever reason you have for your favorite season, people usually do prefer one over the others. What causes the seasons? And what are the effects of the seasons on health? Are there healthier seasons? Does the season of one’s birth affect their later health? 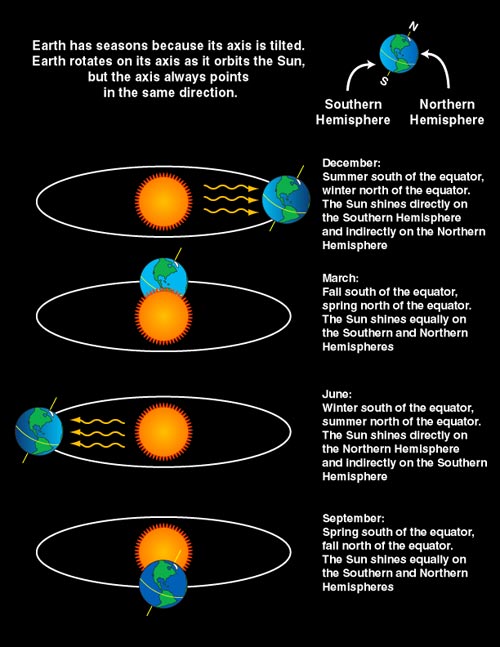 On my Facebook page, I recently conducted a very unscientific survey of the seasonal preferences of friends and family. While the results were fairly mixed, overall there was a preference for autumn. However, recent larger surveys of Americans tend to affirm that the temperate seasons of fall and spring are favored, with a YouGov survey in 2013 showing fall as the favorite of more people, and a Gallup survey in 2015 showing spring as the favorite of the most people. Could the month of one’s birth have an impact on seasonal preference? While most report that their preferred season has the weather they enjoy most, this can differ from region to region. If you are from Florida, you might prefer winter, because a Florida winter is more temperate and most like spring or fall in the rest of the country.

Some scientific research shows that the season in which one is born might make a person more likely to be prone to mental illness. A study conducted at Vanderbilt University in 2010 demonstrated the so-called “imprinting effect”, at least in mice, in which the daylight one is exposed to during the early months of life has a lasting impact on the brain. This may help explain the greater levels of schizophrenia, depression and seasonal affective disorder in those born in winter. Conversely, babies born in May through June seem to be somewhat healthier overall.

Illness tends to rise during the autumn and winter months. In many cases, this is due to children returning to school and sharing germs with each other in close quarters, and then bringing those viruses back to home to families, who are spending more time indoors during the colder months. The drier indoor air during this time also makes people more susceptible to cold viruses. Flu tends to peak in winter as well for the same reasons. Regardless of the season, doctors insist that the best way to stay free of viruses is through regular hand washing, a good regimen of diet and exercise, and getting enough restorative sleep every night (usually 7-8 hours for most people).

And perhaps the sun itself plays a role in seasonal preference and health. Many people are deficient in vitamin D. The deficiency can cause a number of health problems, including muscle pain and fatigue, and may even play a role in multiple sclerosis and cancer. The easiest and most common way to increase vitamin D in the blood is through sun exposure. The body converts sunlight to vitamin D, which is then used for healthy muscle and bone. The active spring and summer months expose people to sunlight making these deficiencies decrease in summer and fall.

Tuesday: Mostly cloudy and very humid, but not as hot, with a chance of an afternoon shower or thunderstorm, possibly severe. High 85. Light SE wind. Chance of rain 40%. Around a tenth of an inch of rain possible, higher in storms.

Wednesday: Mostly cloudy and very humid with a chance of a shower or thunderstorm, possibly severe. High 86. Light S wind. Chance of rain 40%. Around a tenth of an inch of rain possible.

Thursday Night: Cloudy, warm and very humid with a 50% chance of a shower or thunderstorm. Low 74.

Friday: Cloudy and very humid with a 50% chance of a shower or thunderstorm. High 84.

Friday Night: Cloudy and very humid with a 40% chance of a shower. Low 71.

Saturday: Mostly cloudy, hot and very humid with a 40% chance of a shower or thunderstorm. High 93.

Saturday Night:Partly cloudy and very humid with a 40% chance of a shower or thunderstorm. Low 72.